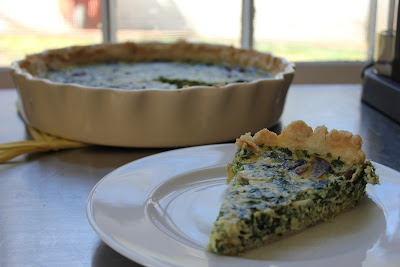 Prior to October 2011, I had never made a quiche! Quiches are great because they're pretty straight forward and versatile; you can put about anything in one and make it your own. I did a little bit of research and adaptation over at Smitten Kitchen (here and here) and came up with just what I wanted: a Spinach and Mushroom Quiche. I debuted it for my mom's birthday brunch back in the fall, and it has made several appearances in my kitchen since then.

Preheat oven to 350 degrees. Mix ingredients for the crust with a fork just until they come together in a loose ball. Press the crust into a 12" pie dish and set aside.

In a saucepan, saute the sliced mushrooms in 2 T. butter on medium heat for 5-6 minutes, stirring occasionally. Take off heat and set aside.

In a mixing bowl, beat cream cheese with handmixer until smooth. Gradually add eggs and milk. Stir in spinach, Parmesan cheese, mushrooms, salt and pepper. Pour mixture into prepared pie crust and bake for 30-40 minutes, or until crust is golden and filling is set.
Posted by R. No comments:

Does anyone make playlists all the time like I do? I used to have a rule that every playlist I made had to have either a Bob Dylan and a Beatles song on it, but I'm breaking the mold today even though I'm feeling like either "I've Just Seen a Face" and "Mixed-Up Confusion."  So here goes, it's my "mix tape" for the end of January:

...with the fact that it's National Chocolate Cake Day! Thanks for the heads up, Hello Giggles. It's a given that chocolate is at the top of my list of favorite things (higher on the chain than shoes, guys), and I want to do something to commemorate this fine holiday. Remember when I posted a long time ago about loving the above-pictured cake? Well, I loved the picture and the recipe but never made it. That might have to change tonight; although, I have a new recipe for chocolate lava souffles (seemingly a contradiction in itself, but delicious nonetheless) that I want to recreate after eating it at a restaurant. Maybe I should make both? I have an excuse...

...with today. It's 64 degrees in Charlottesville, and the weekend is supposed to be just as beautiful. I consider this to be a huge blessing. I want to take up running, so I might pull a Zooey Deschanel in Yes Man and have a jogging photography session to break the ice.

I'll be back next week with some more on etiquette, but until then, have an awesome weekend!

Image from What Katie Ate
Posted by R. No comments:

Etiquette in Conversation: Asking "What do you do?"

Is it weird that I've fallen in love with Amy's fountain of knowledge all over again? I'm hung up on etiquette this week (and probably indefinitely, so sorry if my blog turns into an homage to Amy Vanderbilt). Today's excerpt is from Etiquette in Conversation:

ASKING "WHAT DO YOU DO?" Many people in a social setting, such as a dinner party, resent being asked by someone they've just been introduced to, "What do you do?" They feel it's nosy; that the asker is trying to ascertain whether they have a spellbinding job and that, if they don't, the person won't be interested in talking to them. Before asking someone what he does, give the conversation a chance to lean in that direction. Most often it does just that. (697)

Raise your hand if you're guilty. So, what do you do? This is probably number two on R.'s list of most frequent inquiries when meeting new folks, number one being, Where are you from? (I vowed in October to start asking people Where are you going? rather than Where are you from? but I'm just getting comfortable with the idea of really doing it.).

I met someone at a party last year, and I popped the question the wedding's next spring, if you're interested. There was a long pause, not the good kind, and then I was overcome with a feeling of regret, which made me want to shove myself in the shoulder and yell What is wrong with you! (because I could foresee what the person was going to say). Then my fellow acquaintance spoke: "I'm actually looking for a job right now...(another long pause, still not the good kind)..." I don't remember anything except the thought going through my head: Riiiiighht...because the economy is looking a little shabby these days. Note to self, don't ask that question anymore. All in all, not my best effort.

Basically, you don't want someone you've just met thinking that you're imagining them binge-eating Pop Tarts, watching reruns of Saved by the Bell in bed (on their laptop), and making the occasional word-tweak on the resume just prior to their daily Shakespearean soliloquy, "To shower, or not to shower--that is the question," while you're slaving away at your job. So just don't do it. I'm totally with Amy on this one, except I'm actually going to propose a solution, instead of giving the conversation a chance to "lean" in some direction. Perhaps What do you like to do? is a good alternative. Two words make all the difference.
Posted by R. 1 comment:

Etiquette: The Art of Communication

A few years ago, my parents gave me The Amy Vanderbilt Complete Book of Etiquette (50th Anniversary Edition) for my birthday. I'll state the obvious: sometimes etiquette books can be really uptight. However, I have found it to be a very handy piece of literature to have around and I think everyone should have an etiquette book on their shelf. I don't sit around reading my etiquette book, but sometimes I pick it up and thumb through it for entertainment or if I need to consult with it regarding a newly arisen "issue."
My friend M. visited me yesterday and an etiquette issue came up about a wedding, so I whipped out my 786-page companion. I opened the book and the first page I came to was a section entitled, The Art of Communication: Etiquette in Conversation, and here is what grabbed my attention:
SAYING, 'LET'S GET TOGETHER' WITHOUT SUGGESTING A FIRM DATE: Sometimes you run into an old friend on the street, someone you're uninterested in, or who perhaps bores you. You may find yourself nervously saying, 'Let's get together. Call me sometime.' If you really want to get together, make a firm date. Don't ask the other person to assume the responsibility of contacting you. He'll see it for what it is: an excuse to avoid seeing him. (694)
I read this excerpt and blurted out, "Ohmygosh, I just did this last week!" and both M. and I busted out laughing. Then I felt like a horrible person because I didn't want the recipient of my verbatim phrase "let's get together" to be offended because I really do want to hang out. I'm also certain that I threw in "we could get coffee" as well, which makes it even worse because I don't ever go out for coffee. Most likely, my friend was not offended by this, but upon reading this excerpt, I immediately had a notion to email it to my possibly offended friend, make a funny comment about how uptight etiquette books are and write the following: I am not trying to avoid you, I honestly want to hang out; however, I was quite certain your life is busier than mine, so I thought it would be easier for you to pick a date (On second thought, why couldn't I have phrased it like that in person?)...I think I'll forgo the email and set a firm date the next time we bump into one another. How creepy is it that this is the first thing I saw when I opened the book, though?
Image: by Carla Coulson via French Essence
Posted by R. 1 comment: