Today I have several photos to share. Yesterday I finished my first knitting project ever (the scarf I started in June), and it really did feel like a major accomplishment! Here are a couple of shots at the color variation and pattern: 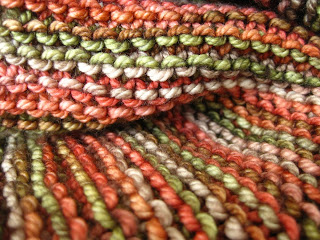 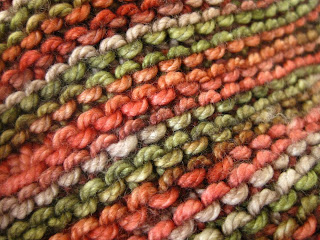 Here's the yarn that my dad bought for me! I can't remember what type of yarn it is, but it is 100% wool...I will have to update this once I find the tag for it! 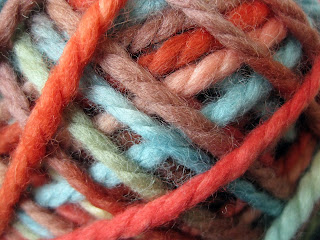 On Sunday afternoon, H. and I rode over to Staunton, VA to stroll around downtown. I love train stations, so I took some shots of the one in Staunton. Here are a few glimpses of what we saw: 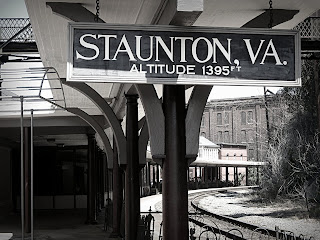 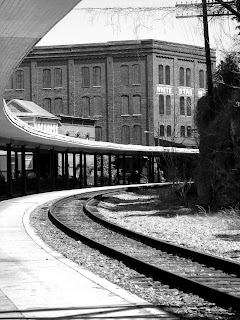 H. clerked for a couple of judges in this building a few years back: 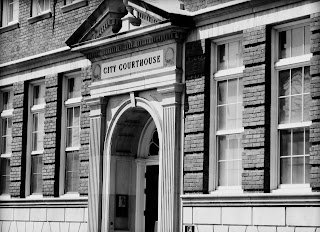 The cosmetology school display window wasn't creepy at all, especially with the self-portrait of yours truly reflecting off of the window. 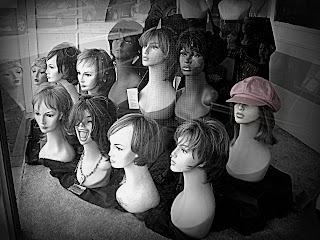 Yesterday, I bought some gorgeous dusty pink yarn on sale that would look yummilicious in this house; my yarn is a washed-out, creamier shade of the walls below. I love the pink marble columns in this room, as well as the entire blog post about the French Riviera. Check it out below. As far as the yarn is concerned, I want to make a hat and hand warmers with it.

The French Riviera via Cake, Couture & Cie Here is my new yarn: 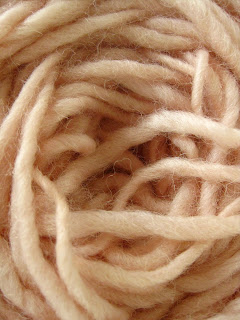 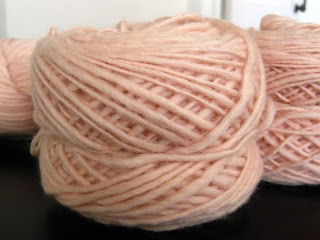 We Rogues of Wool

This past weekend I visited my family in Lebanon.  It was very good to see everyone; per the usual, Mom had wonderful food waiting on the stove when I walked in the door.  She also had another little surprise waiting for me...
Behold! I re-introduce Lucky to you, not as a savage, wilder'n a buck kitten, but as a domesticated-porch-residing cutie who loves to be petted and held by my Mom.  When Lucky isn't cat napping, er ,ruining the red-and-white-checked porch cushions for which Mom searched the earth dry a couple of years ago, he sits at the kitchen window and watches my mom.  He is adorable and if I had to guess, a little spoiled with all the half-and-half he's been consuming over the past few weeks.
Mom and Lucky: 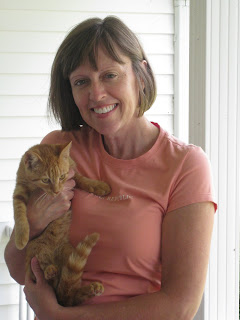 What started as a Sunday crafternoon to hang out with good friends and work on projects has turned into an every Tuesday evening venture that we are fond of calling Crafterdinner.  Here's how it all began.  Back in May, I was invited to a bridal shower for Poochie, who got married on August 7, hosted by one of her bridesmaids S.  When I arrived at the shower, I had the Jill bag with me, and S. told me that she had made the exact same bag!  She then suggested a crafternoon since we were both sewers.  Well, crafternoon came into fruition sometime in July, right around the time I began knitting, and Poochie wanted to learn how to knit post-wedding project completion.  Nowadays, we call it Crafterdinner because we meet up post-dinner (on second thought, the name seems kind of obvious), and it has taken the form of a three-musketeers-esque knitting party.
Friends, it is with great honor that I introduce the Crafterdinner Crew (from left to right:  Poochie, S. and me).
Photo taken by Poochie's hubby M. 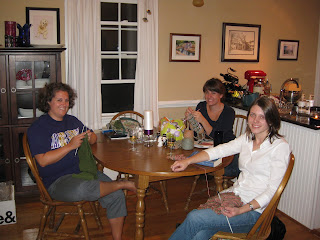 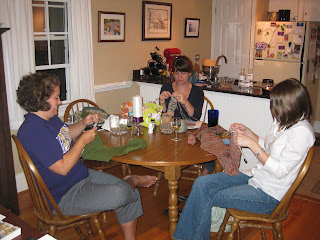 Obviously, S. is the most experienced knitter in our midst at Crafterdinner, look at her daisy stitch hand warmers! 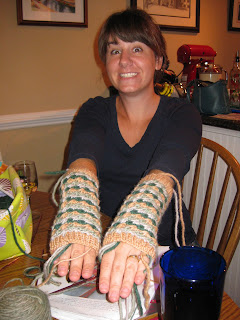 Poochie and I are looking forward to the many tricks she will impart to us from her brain full of knitting knowledge, and as an update, I am able to honestly say that I see the light at the end of the tunnel on my scarf.  I'm on the look out for a new, challenging project now; my dad was so sweet to buy me some new yarn at A Likely Yarn in Abingdon, VA when I was home visiting this past weekend.  I will have to take a picture of it to share; it's multicolored hand-painted 100% wool.
Posted by R. No comments:

It is time to unveil my finished rag quilt!   This photo was taken prior to washing the quilt, as I had a fear that the colors would bleed in the washing machine, but alas, Shout's Color Catcher sheets kept it from doing so (since I didn't pre-wash the Rural Jardin fabric). 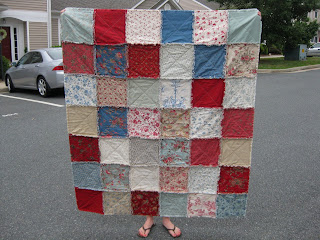 Also, remember the brownie mosaic cheesecake that I made about a month ago? 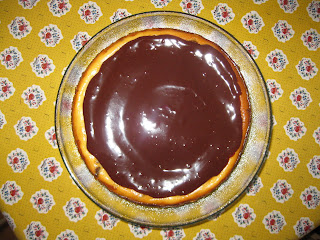 I should make this cheesecake again and eat a slice while sitting on my rag quilt somewhere outside... 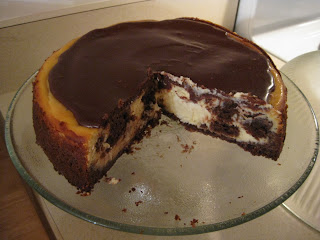 Ya'll.  It's been way too long.  My little Junebug (iBook) is being stubborn and won't let me download my pictures onto it so that all the world can see my first quilt ever (the rag quilt that I previously  mentioned)!  The hand is much better, so I've been able to knit, and my scarf is actually beginning to resemble a scarf.  I may have to take a photo with the phone (which by the way, does it annoy anyone else that cell phones these days seem to do everything except send and receive telephone calls?), even though it won't be the best quality picture.  But I'm desperate here.  Technology:  friend or foe?  I seem to have a complex with blog-posting sans photos, but I need to get over that.

In knitting news, I spent a fantabulous day with Niknak over in Richmond on Saturday and taught her how to knit!  The yarn and needles she's using on her red scarf belonged to her grandmother.  Every time she wears the scarf, and even while she's working with it, she will be reminded of her grandmother, which I happen to think is awesome.  It's Niknak's heirloom scarf.  I am fascinated by the idea of heirlooms in general, how something becomes an heirloom, how an heirloom (no matter how small) can affect our memories of a person, place or time.

I have fallen in love with some yarn.  Is it possible, you're thinking?  Absolutely, especially when it's a dusty colored baby pink yarn with teensy weensy sequins woven into it that match the yarn's color.  And for the record, yes, I was a part of the 1990s Barbie generation.  Anyway, I'd like to make a dainty little scarf out of it to go with LBDs or something.  Or maybe I should just use the cream-colored one.  Or black!  So many decisions to make...All I know is that a fellow knitter friend of mine informed me that I'm about to fall into the knitter's trap, where many projects get started but few get completed.  I'm holding out until I finish my scarf, which measures over a yard at this point, so things are looking up, except for the lack of pictures in this post.  Happy Thursday!
Posted by R. 2 comments: