A week before Sandy, my mom and I took New York by storm for our first ever girls' weekend trip. On one hand, it seems like we were there months ago; however, in light of the hurricane aftermath, the trip is still fresh. I am so thankful we had a safe trip to and from the city. We packed an epic lunch and hitched a ride on the Amtrak from Charlottesville up to Manhattan. It was Mom's first trip to New York, and she did not have a great first impression. To quote her: "This place is a nightmare!" In her defense, we had what some might call a treacherous walk from the train station to our hotel. There was a bucket of water, gunky sidewalk slush and a new pair of orange suede shoes involved. You do the math.


After a weekend of visiting the amazing Google office to see our friend M., seeing The Lion King on Broadway, walking around parks, museums, department stores, etc., and eating delicious food, Mom was on the I Heart NY train. If you're wondering, her shoes turned out to be just fine [insert sigh of relief here]. Below are some pictures of M. teaching Mom how to hail a cab on Fifth Avenue: 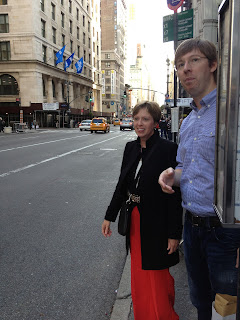 Throw your arm up really fast! 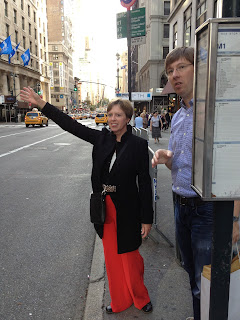 And even then, sometimes they'll drive right by you... 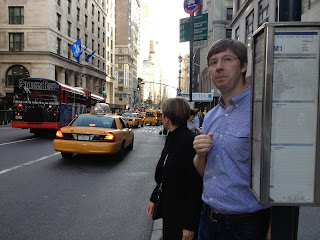 Yay for mother-daughter weekend trips! When's the next one, Mom? 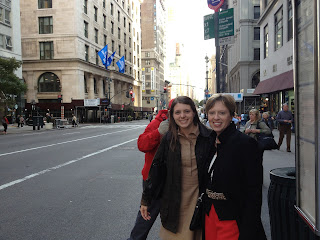 Oh, and if anyone's still reading this here blog, don't forget to go vote today. The fate of America is in your hands, reader(s).
Posted by R. No comments:

Well, this is dedicated to my last day in Paris...6 months after the trip. The last day of the trip was kind of sad for me because I wasn't ready to leave, but it was the most beautiful day we had in Paris. Han and Ken went to work, and J. and I split up for the day to reconvene at 3:00 p.m. with our new friend Hortense (from our baking class the day before). Obviously, the first thing I did was hit up the nearest boulangerie for my Parisian breakfast: pain au chocolat and cafe au lait. I sat at a tiny silver table outside ogling at Cafe Chic and lamenting that I did not go there during our stay. Next time! When I got into the metro station and was waiting for my train, I looked across the platform to see J. on the other side catching a train in the opposite direction. I kind of got excited that we bumped into each other by chance. We smiled and waved as if we hadn't seen each other in years.


J. had trouble with her camera's lens cap the whole trip. As it turns out, it fell into the metro tracks...a little souvenir for Paris from J. 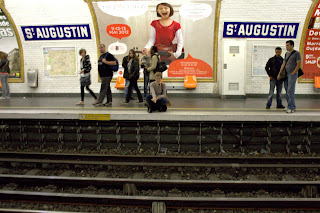 I was going to Galeries Lafayette and J. was headed toward the Grand Palais for a Helmut Lang exhibit. I wanted to breath Paris in from the rooftop terrace (and pick up a wonderful blue and red floral cotton/silk scarf I had seen days earlier). An artist was painting up there and several people were eating their lunches. 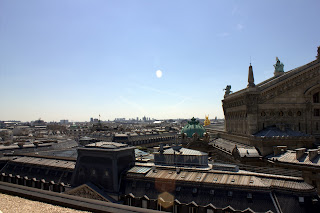 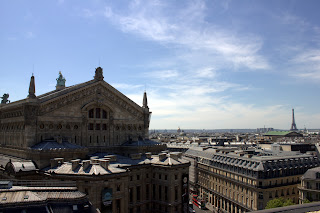 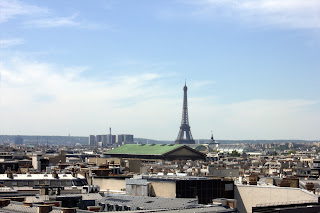 When I left Galeries Lafayette, I decided to metro down to Pont Neuf and go to Rue Dauphine. It's a beautiful street with shops and galleries (Side note: We had gone there a few nights before to get gelato and Han got romanced on the Pont Neuf bridge! Gelato turned Ken all sweet.): 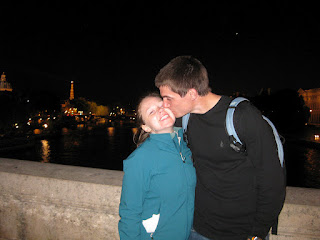 When I got off the metro, it happened. That moment. The whimsical moment I had been waiting for. This lovely song came on my iPod as I floated across the Pont Neuf bridge. I don't know what exactly was so magical about that three minute stretch of time, but it was straight up awesome. When I hear that song, it always takes me back to Paris (even though I'm pretty sure it's about New York). Here are a couple of shots from the Pont Neuf bridge: 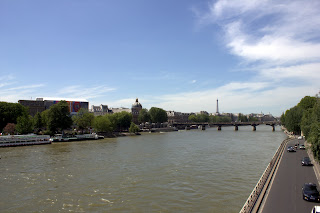 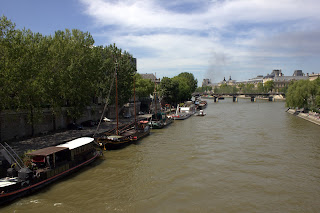 Once on Rue Dauphine, I went in this cool shop and met a nice girl named Sissy (pronounced See-see). Shortly after discovering I was American (not difficult for most Parisians), the first thing she asked me if I had been to Times Square in New York. I grinned and nodded, and she told me it was one of her life's goals to go. I thought, Whhhhhhhhattt! Sissy, get real, you live in Paris! Why on earth would you want to go to the nightmare of Times Square when you're in this wonderful place? Instead, I laughed and told her yes that it was very bright, very loud and very crowded-worth seeing a good show, but definitely not the best part of New York. Anyway, she was a very friendly face and we had a very nice conversation.

Meet Sissy. Look at her sequin skirt! I loved her lipstick and wish that I had asked her about the shade. 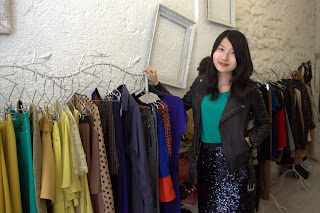 While walking back across the Pont Neuf bridge, I sat in one of the built in cubbies and wrote some postcards. I met Hortense at the Place Monge metro stop, and she greeted me with a kiss on each cheek (that made me shamelessly happy). I tried to call J. after about 15 minutes when she never showed up, and of course, the phone I was using was being dumb and I could not reach her. Hortense even tried to call J. on her phone. Dumb international phones.


A similar telephone communication malfunction happened on Wednesday of the trip, but I was a tad concerned because did not have a back up plan for meeting. The only thing we knew besides meeting point and time was that Hortense wanted to take us to the Great Mosque of Paris to have mint tea, and I had no clue where J. was planning to go other than the Helmut Lang exhibit and "some art galleries." While waiting on J., Hortense strolled me around in the Latin Quarter and I bought a ham and cheese crepe because eating helps me think. When I finished the crepe, an hour had passed and worry hit me. Where was she? Why wasn't her phone working? Did I mess up the dialing? And then the unwelcome thought: What if something is wrong...The mosque was pretty close to the metro, so Hortense and I walked over to check out the garden of the mosque with the intention of going back to the metro in 15 minutes. After seeing the garden, we rounded a corner toward the entrance of the restaurant and almost ran into J.! As it turns out, she had walked "off the map of Paris" she was carrying around but had managed to stumble back on it to find us. And the phones. Again, dumb. Y'all. I was so relieved and so happy to see her!


Before we walked in, Hortense said, "You are not going to feel like you're in Paris inside here."
Inside the restaurant: 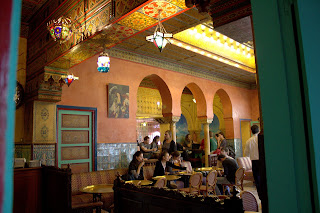 We were in this bright room with a canopy and enameled tiles sipping hot, sweet mint tea. It was delicious! I was pleasantly surprised by its sweetness. It made me think of home, except for all the exotic looking decor and mosaic tiles. Oh, and there were birds that flew very close to people's heads in there. I was paranoid because once a bird did fly into my head. This is Hortense. 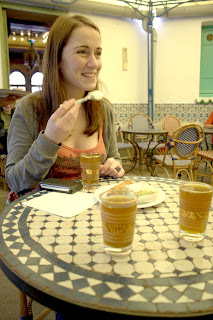 Hortense showed us around a university garden...the only thing I forgot on the entire trip was my sunglasses. 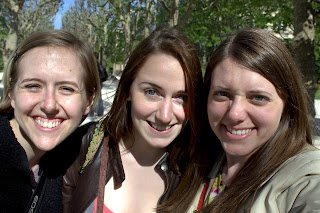 Hortense was full of information about Parisian structures and buildings because she used to study architecture prior to becoming a pastry student! She took us to some great buildings, we walked along the Seine and then she escorted us to what she affectionately called "the best ice cream shop in Paris." Coming from a pastry student in Paris, I was glad to try it! I got chocolate ice cream and it was divine. Sadly, I cannot remember the name of said ice cream place or where it was. All I know is that it was on the Left Bank close to Pont Neuf. While we were saying goodbye to Hortense, J. ran into a friend from college on the street...at the same ice cream shop. Small world.


So, I think I mentioned this before, but we lost sleep throughout the entire trip. If you can imagine, I looked and felt like the walking dead. We decided to stop at our last cafe before dinner for some sparkling water because it's perfectly acceptable to do that in Paris. This is where I told J. to give me her best Lady Gaga impression: 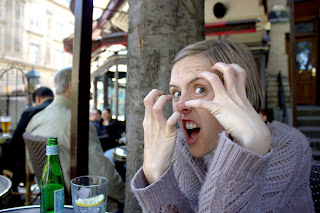 We then had the best meal of our entire trip at a restaurant called Ambassade d'Auvergne. Don't ask me how, but I called them from J.'s phone and made reservations in, not exactly French and not exactly English. It's all a blur to me now, but I had the best roast duck breast of my life with these insane cheesy garlicky mashed potatoes called aligot. If you're ever in Paris, flock to this restaurant for the duck. It's outstanding. The sad part about our last meal is that I was so tired that I felt like I was going to fall asleep at the dinner table and could not finish the aligot. We went back to Han's for one more couch surfing evening before hopping across the pond. We had a slight mishap with our airport shuttle, but in the end, we got there and back to America in one piece. I'll leave you with a couple of random pictures from the trip: 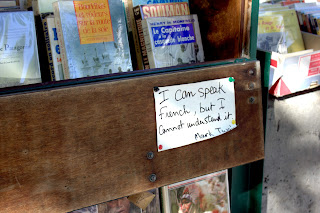 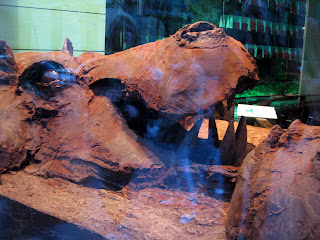 Until we meet again, Paris, I'll be dreaming of you. You are magical to me.
Posted by R. 1 comment: