Alright, let's get back to it. On Thursday, I left Han's flat alone and had cafe au lait and a apricot tart for breakfast. The only reason I didn't eat pain au chocolat on this day was because it was my second consecutive breakfast stop at the same little cafe (it was such a convenient location to Han's flat). It is also right across the street from this cafe with a bright red awning whose name is written in white cursive: Cafe Chic. I spotted Cafe Chic on the first day when I went exploring around the neighborhood, and I really wanted to eat there because it seemed so stereotypically...French. It became a joke throughout the week that we were going to eat at Cafe Chic. It was such a cheesy-sounding cafe name, and we assumed that the food probably wasn't that good (judgmental of us, I know), but every time we walked by there at night, it was crowded, and the only comment we could muster about it was, "Everyone looks so chic!" And I'm not exaggerating. Unfortunately, we did not get to visit Cafe Chic on this trip, but the next time I go back to Paris, I plan to dine at Cafe Chic.

After breakfast, I rode the train down to Musee d'Orsay. Musee d'Orsay is kind of known for its extraordinary Impressionist masterpieces, and that was my reason for visiting. 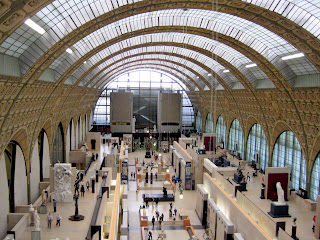 A sweet clock at the top of Musee d'Orsay from which you can look out into the city: 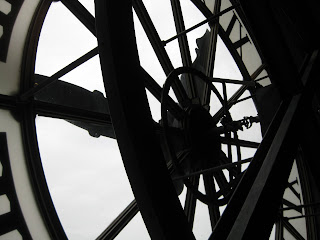 So at 10:45 a.m., I found myself standing about ten inches away from Vincent van Gogh's 1889 self portrait (y'all, I know he's post-Impressionist, but they had a lot of his stuff too). The texture of this painting was amazing, and I love the colors of his eyes in it. I don't even know what else to say about it but, wow. Seeing it up close and in person was a wonderful experience.

I went up to the fifth floor to the Impressionist portion of the museum and I really enjoyed it. I loved seeing Claude Monet's "Bras de Seine pres de Giverny" (aka "Arm of the Seine at Giverny") painted in 1897). I am always finding myself attracted to blues and greens. They also had a handful of Camille Pisarro pasture paintings of grazing livestock. My favorite Monet painting was "Essai de figure en plein-aire: Femme a l'ombrelle tournee vers la detroite." I was especially struck by the movement in the painting; it's shown only in the blue-green wind-rustled scarf and her skirt. It's what gives her life. I'm no art critic, but I read that Impressionism in general captured the moment, or rather, the paintings did. I thought this was a good illustration of that.

My favorite painting I saw in Musee d'Orsay was Gustave Caillebotte's "Les raboteurs de parque" (aka "The Floor Scrapers") painted in 1875. I wonder how long it took him to paint this; I imagine it took a while. There's something about labor that I think is beautiful, and that's why I loved this painting. There is an art to labor.

Around 11:30, Musee d'Orsay started getting crowded, so I decided to peace out and do what was next on my list: go back to Montmartre and buy a piece of leather I'd found in a tissu shop two days prior. Perhaps I should have felt hesitant about doing this because I had gone to Montmartre with Han and J. and there was a slight chance I wouldn't be able to find this tissu shop by myself. However, I kept a very detailed account of everything we did on the trip (or I wouldn't be writing about it on here) and I have a pretty good sense of direction (as well as a trusty Paris map). I had the address of the shop from which I had purchased the cotton and linen fabrics, and the shop with the leather I wanted was just right down the street. Anyway, I got off the metro at the Anvers stop, which spits you out directly into what I'm calling the fabric district of Montmartre. I found the dusty pink imprinted Burmese leather I was looking for after all and snatched it up, and when I walked around the corner, I realized that Han, J. and I had missed the majority of the tissu shops one street over.


I briefly went into this woman's shop; she was chatting away with her customers, telling them all about the textiles they were holding. It was all in French (obviously): 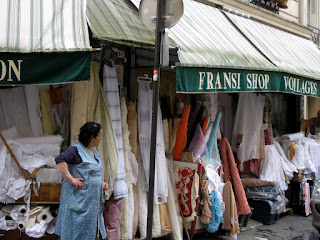 I went into one ribbon store called Doration Passementerie (24, rue d'Orsel), and it was exactly how I would imagine an old school ribbon shop. There were spools of purchase-by-the-meter ribbons from the floor to the ceiling, everything was perfectly organized, and the shopkeeper was a very elegant older French woman who was very friendly. Oh, and the grosgrain! I could have spent my entire life's savings in that place. This transaction was my third favorite shopping experience (my favorite will be on Friday with a local French fashion designer and my second favorite on my last day in Paris). I bought some beautiful grosgrain ribbons at this shop. This lady did not speak English, at all, and we kept getting tickled because I was trying really hard to say something comprehensible to her even though I don't speak French at all. I was giggling and apologizing in French every other breath, but she was so sweet about it.

Another memorable experience I had in the tissu district was when I walked into an upholstery store owned by a married couple, er, I think they were married. I presume they were married because the woman was screaming and yelling at the man, and he in turn would bicker right back at her. In between he would come over and talk to me in broken English and she never stopped yelling at him. I  immediately thought about the "Bonjour" scene from Beauty and the Beast (yeah, the Disney movie) where the woman hits the guy over the head with a rolling pin when he helps a young lady at their produce stand. I didn't spend much time in there before I walked into a leather/fur shop, which had gorgeous pieces in it. The young woman in the shop wasn't interested in me because I didn't speak French. She wasn't directly rude, but she was so aloof that I felt kind of uncomfortable. Maybe that was me being self-conscious. I did buy some leather from her because I had touched everything in the shop (and it was really pretty). One shopping faux pas in France putting your paws on everything in the store. When it comes to textiles, though, I just can't help myself. I did get a 3-meter-cut of some beautiful padparadscha-colored silk in a different tissu shop before departing Montmartre for the last time.

I met J. outside of Galeries Lafayette, a French department store on Boulevard Haussman. I'd read a lot about this department store, and its 10-stories of shopping do not disappoint. They have various eateries throughout the store as well as a Dom Perignon bar where you can order a glass of champagne to drink if you need to cool your heels mid-shopping. I could've spent an entire day in this place. J. and I had a snack and then hit up three floors of women's clothing before going to the first floor which was filled with shoes, shoes and more shoes. I got my first piece of Parisian apparel here, which was a short-sleeved, cream lace dress that ties in the back. The lace is scalloped on the hem and the nude slip underneath hangs below the scallops. Be still my heart, I love that dress!

These are some photos I took while J. and I were cooling our heels (with complimentary cups full of water, not Dom Perignon): 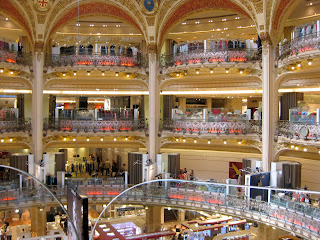 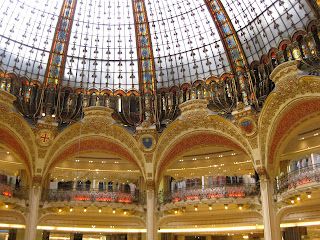 For dinner that night, Han, Ken, J. and I went to a local pub called Bouclier de Bacchus in the 9th. This place was a gem. It's where a lot of locals go (according to our hostess Han), meaning there were no tourists. I'd go back there in a heartbeat! It's a small joint, and when you walk in the door, there is a small wall to the right with bottles of white wine from the floor to the ceiling, and on the left, a huge wall with bottles of red wine from the floor to the ceiling. We got a bottle of Grand vin de Bourgogne's Chorey-les-Beaune (a yum red wine) and a meat and cheese plate to share. Since the tables were all so close, we made friends (one of our goals while in France: to make French friends, check) with a couple who talked to us for a while. During the conversation, J. jokingly asked the man how to get a French man, and he said, "Go to L.A.," laughed (because he met his wife in L.A.) and then went on to say, "It's a choice. Open your eyes and your ears." Thank you, insightful Frenchman, we'll have another bottle of wine on that note! Later, the couple asked us if we wanted to try a dab of their wine, and J. had a touch of our wine left in her glass. When she consented to trying the new wine, he grabbed her glass and threw her Chateau de Valmer Vouvray onto the floor of the restaurant before pouring her a taste of their wine. It was a very entertaining experience. That's all I've got for today, folks.
Posted by R.