On Wednesday, J. and I headed toward le Musee des Arts Decoratifs (Fashion and Textiles museum, which is attached to the Louvre). It was our first metro ride without Han, and we were able to navigate it very well! I need to feel oriented in a place, and I knew that was starting to happen for me on Wednesday when Paris didn't seem so big to me anymore. In fact, it was starting to feel more and more like a quaint, small town. Anyway, back to the Fashion and Textiles museum.

It was in this museum where I saw my favorite exhibit: Louis Vuitton Marc Jacobs. As per the museum norm, photography was prohibited, but I really enjoyed just being in this exhibit. It was a two-story exhibit. The downstairs was about Louis Vuitton, and the upstairs housed Marc's world. Here are some images from the exhibit taken by Vogue UK. I learned so much about Louis Vuitton (both the man and his company). One such thing I learned was that he specialized in the packaging of haute couture. Maybe everyone else knew that except me, but whatever, R.'s rocking a new appreciation for LV. My favorite part of the exhibit was Marc's world. It was very colorful and loud, and there were audio recordings of him talking at different intervals. Very cool. He said that he always likes to start with a dialogue, that's he's really bad with a blank piece of paper; I liked that. I enjoyed LVMJ so much that I went through it twice while we were there. To be frank, I didn't really enjoy much else in the museum.


After a mealtime conundrum which ultimately lead J. and I to a lunch at McDonald's, I thoroughly enjoyed some Micky D's. It was actually delicious (familiar/comforting food halfway around the world was a plus for me during aforesaid conundrum). It took us a few days to realize that we needed to decide what we wanted to eat before we both became hangry, but we finally got the hang of it. After lunch, J. and I split up for the afternoon so she could hit up Centre Georges Pompidou (aka a famous modern art museum) and so I could go to Musee d'Orsay (aka a famous Impressionism art museum). Here's a tip, don't go Musee d'Orsay right after lunch. It's way too crowded. When I took one gander at the line outside, I thought, Forget it, walked away and never looked back. After that, I literally got lost in the Saint-Germain-des-Pres area. I had a map, but I had no intentions of going anywhere in particular, and that was one of my favorite afternoons in Paris. I really enjoy aimless strolling.

So, J. had an international cell phone, and I was using a pay-as-you-go cell phone that belonged to Han during the day. Our intention was to call each other and meet up, but it's a good thing we had a back-up plan, which I had to implement as soon as I realized that my phone was out of minutes/texts. Through a string of events where my phone would receive a few thirty second telephone calls prior to a lovely French operator saying some incomprehensible stuff to me (weird), I gathered from Han that she and her beau Ken would be home between 6:30-7 and that we were going to a place near where J. was (they had spoken apparently) for dinner. So I met them back at the flat before going to meet J. at the Pont Neuf stop. Looking back, it was kind of awesome that all that worked out the way it did because we were all able to meet in the right places and then go to this restaurant of amazingness: 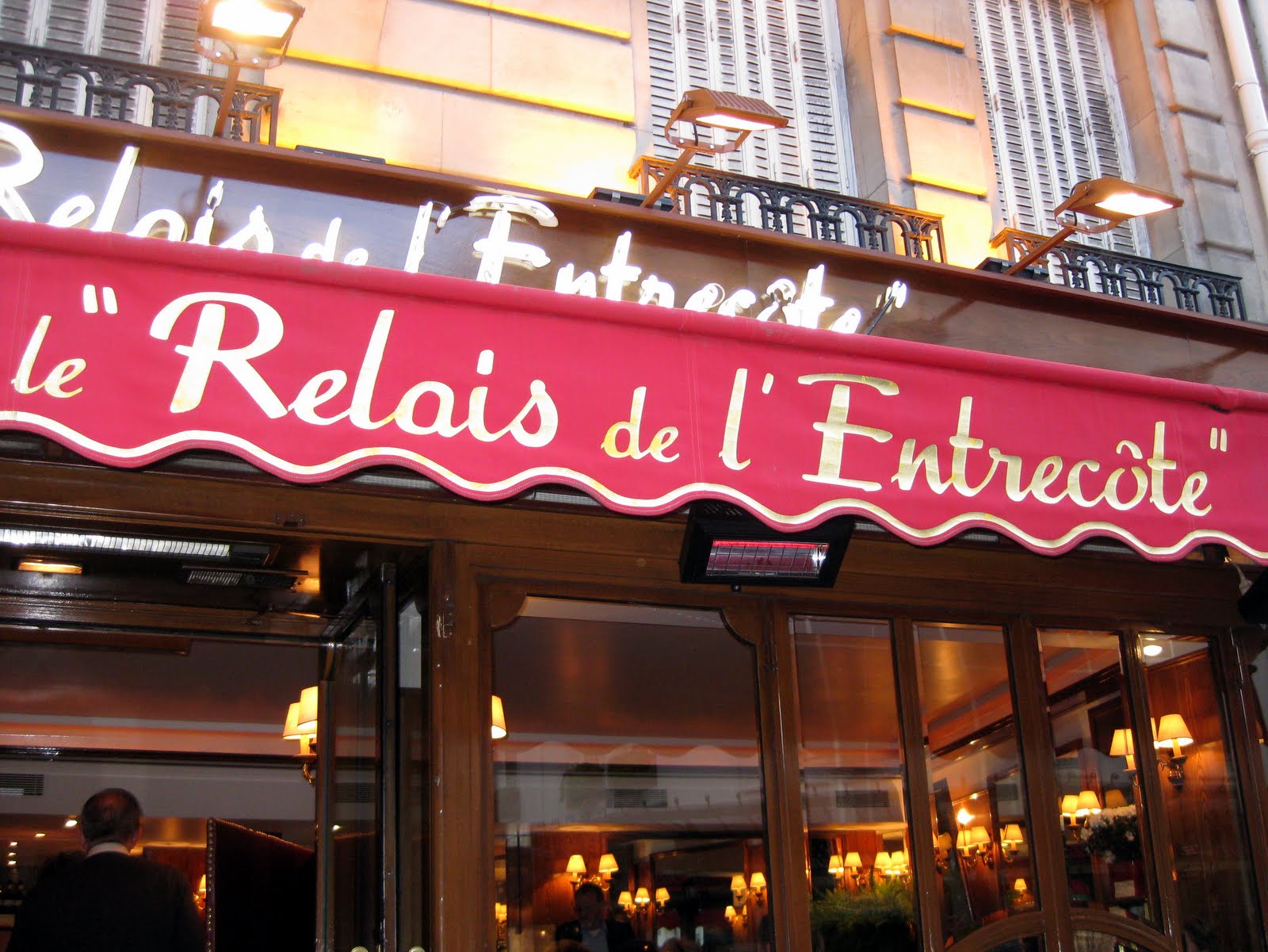 Han and Ken walking through Saint-German-des-Pres on the way to Le Relais de l'Entrecote: 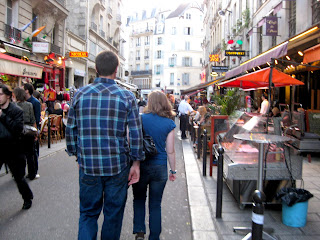 Le Releais de 'Entrecote has only one main dish: steak frite (steak and fries). They bring you a salad with lettuce, walnuts, parmesan cheese and spicy mustard vinaigrette, they ask you how you want your steak cooked (rare, medium or done), they bring you the bottle of wine you order, and an amazing experience commences. Below is my amazing plate of steak frite (they bring you seconds, too, yay). The green herb and butter sauce is very delicious and super interesting...we read some recipe recreations online of this dish, and everyone seems to think they use chicken liver to flavor this stuff. Whatever they do, it's out of this world delicious. 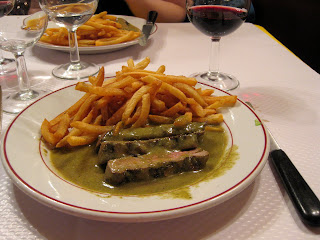 Next stop after steak frite, a Seine river tour that started at 10 p.m.! 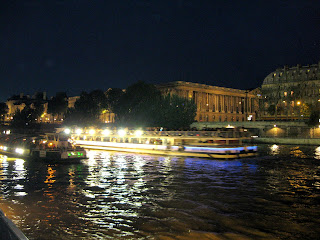 Ken and Han on the river tour: 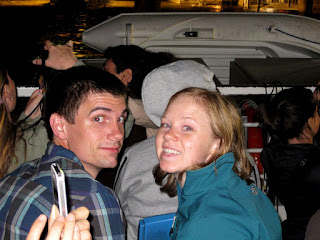 J. and I on the river tour: 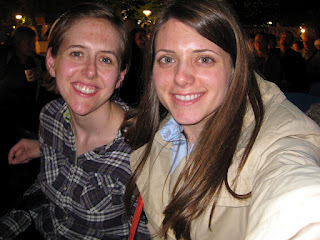 Some Eiffel Tower action with J. on the river tour: 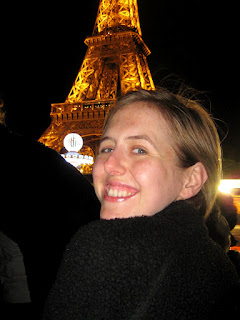