When I travel, I really like to get up and get going in the morning so I don't miss anything. Sleeping in makes me feel like I've wasted that day; needless to say, I was at a complete loss of what to do and how to feel when J. and I didn't wake up until almost noon on Monday. In short, I got ruled by jet lag, y'all. It obviously took us a day or two to get on Parisian time. We showered quickly and set out on foot toward the Louvre down the Rue du Faubourg Saint Honoré, which was a pretty swanky street with many designer boutiques. We stopped in a cafe, and it was crowded because everyone was there on their lunch breaks. I ordered a cafe au lait and my first pain au chocolat (American translation: "chocolate croissant"); ordering food became something which made me nervous at first because I don't speak French. My ordering in French-style became saying the product I wanted followed by "s'il vous plaît." It seemed to work pretty well for me, and I got better at ordering throughout the week, but talking to people in a language I didn't understand was stressful at times. My only back-up plan was to just start roll calling French pastries and desserts because I know a lot of those. 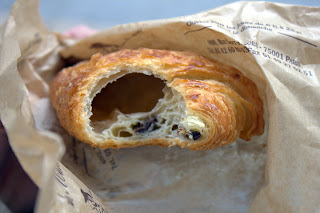 According to a pastry student I met (you'll meet her later), the term "chocolate croissant" is an unheard of item in France. You either order a croissant or pain au chocolat. When I asked her why, she said that the different shapes are used to differentiate them in a bakery; otherwise, it'd be easy to mix things up. I ate pain au chocolat at least once a day from the second day until my last day in France, and the best part was, all of them were different. This one, for instance, had the best quality chocolate in it from what I could tell. Some were flakier, others had more chocolate in them, others had less, etc. I enjoyed trying the different variations of pain au chocolat, because well, it doesn't get much better than buttery pastry and chocolate (duh). Anyway, J. and I people-watched for a while before strolling on down to the Louvre. Check out this couple who was enjoying a lunchtime smooch (they're the couple that give the French a romantic reputation) about fifteen feet away from us. Oh, and that's J. there front and center: 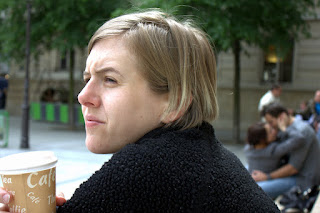 And we finally made it to the Louvre! Here's J. looking all I'm-getting-ready-to-walk-into-one-of-the-most-famous-museums-in-the-world-like-I-own-the-place: 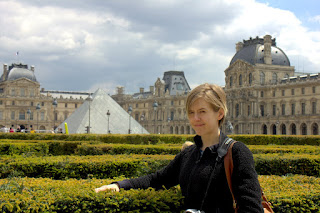 Let me share a few preliminary thoughts I have about museums in general. I call myself a museum cruiser because I don't love the idea of spending hours upon hours walking around museums. So while I thought I should go to the Louvre while in Paris, I wasn't really looking forward to it that much other than to say I'd stood in the presence of Mona. Also, I think it's a much better plan of action to go into a museum with the intention of seeing a particular exhibit or work of art instead of aimlessly wandering around all day (put me on the street, and I have the exact opposite feeling). When we went inside the Louvre, I was instantaneously miserable. It was so crowded and loud, two things I never want to be descriptive of my experience in any museum. J. and I looked at each other and almost simultaneously declared our disdain. Henceforth, the plan was simple: get to Mona, check her out, find a bathroom, peace out (and that's what we did). Being in front of Mona was like being paparazzi at a press conference; we had to fight the crowd to get a decent picture of it.


I'm not hating on the Louvre at all. In fact, I thought the facility itself was magnifique! It was absolutely beautiful inside. The floors, walls, doorways, ceilings, etc. were all gorgeous. In retrospect, I wish I would've gone to see Napoleon's apartments. I did not know he used to live there; how cool is that! I kept finding myself drawn to windows and lights on this trip. Here are some shots from inside the Louvre.


This is a picture taken from underneath the pyramid. 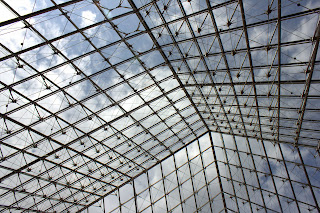 And this one is taken of the ceiling of the hallway on the way to Mona Lisa: 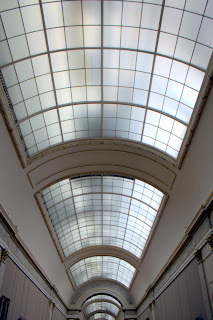 After checking out Mona, we high-tailed it out of that place because we couldn't take the crowd any longer. We jetted across the Jardin des Tuileries, which is in between the Louvre and the Place de la Concorde and hit up the Musee de l'Orangerie. This museum is famous for Claude Monet's Les Nympheas at Giverny. This place was way more my style than the Louvre. For one thing, it was much smaller, and it wasn't very crowded. It's easily one of my favorite museums I've ever been in. I really surprised myself when I thought, Man, I could sit in front of these murals for hours. Downstairs in the museum, there were lots of Renoir, Picasso and Matisse paintings, which were all beautiful. When I go back to Paris, I will most definitely go back to Musee de l'Orangerie!

Afterward, we walked back toward Rue du Faubourg Saint Honoré and came upon Rue de Cambon, the street where Coco Chanel lived. As you may have read on here in the past, I started reading a biography about her back in December (I'm still reading it...), and I have enjoyed it so much. So we decided to go into the store. There are many Chanel boutiques in Paris, but Gabrielle's apartment was above the store at this location, and she slept at the Ritz, which is right across the street. The highlight of this visit to was a gorgeous champagne and green tulle-esque hand-embroidered dress. I wanted to take a picture, but I thought it would be a huge faux-pas and practiced a little restraint. As I was touching this dress, I had a gander at the price tag and whoabackcatfish, it cost 37,000 euros. I quickly took my paws off and J. and I went out for a less-than-average dinner at a cafe near our hotel. I ate free range roast chicken, which was actually pretty good, and French fries. Anyway, Hanban got back into town from a weekend in Italy on this night, so we rendezvoused with her for a little while before hitting the hay. The next day we went to her house and stayed there for the remainder of our trip. More tomorrow!
Posted by R.